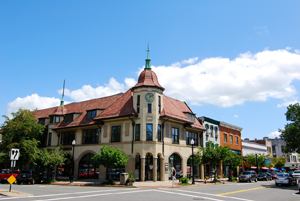 The village of Ridgewood was formed in 1894 from the boundaries of what was Ridgewood Township. The village became the municipal government while the township remained as the school district.

The first home was built in Ridgewood in 1700, when Johannes Van Emburgh purchased 250 acres.

Ridgewood is served by the New Jersey Transit Main Line as well as the Bergen County Line. The two lines both send passengers towards Hoboken but via Secaucus Junction for transfers to Penn Station in Manhattan.

Official Website and information on the Village of Ridgewood and Town Hall: